Back to all posts

Fly Above Negativity by Keeping Your Vibe High 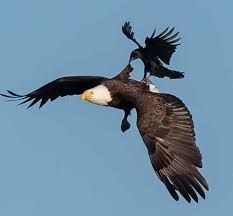 Eagles are capable of flying in very high altitudes where other birds can only dream of going. Their broad wings, powerful lungs, and tough dispositions prepare them to soar above the rest. Being one of the most formidable birds on the planet, however, doesn’t stop the eagle from coming under attack from time to time by birds with foul intentions.

One particularly pesky bird, the crow, harasses the eagle. It sits on the eagle’s back and attacks his neck by pecking it with its beak or pulling feathers with its talons. But the mighty eagle does not respond or fight back. Instead, the eagle simply flies higher—staying focused on where he wants to go. Even though the eagle is clearly more powerful than a crow, the majestic bird chooses not to waste his time or energy dealing with the pest.

As the eagle continues to soar upwards, the crow can’t breathe in the high altitude. Unlike the eagle, a crow's lungs are more suited for lower heights, so it reaches a point where it becomes too uncomfortable to continue trying to bring the eagle down. It grows frustrated that its attack has been ineffective, and eventually, the crow returns to commiserate with something else at its own level.

With our recent societal unrest, we are witnessing countless low-vibe attacks from people in many ways, like social posts, media coverage, emails, and harsh words among friends. While I’m an advocate of sharing individual opinions about which we are passionate, I’m not a fan of how people are attacking each other instead of the problems. It’s a real “pain in the neck” and engaging only on the problems brings us down.

Instead, we could emulate the eagle's behavior when he's under attack. We have the power to focus on the solutions, the positivity, and the things we have in common. What feels right and just for one person is never exactly the same as another because we are unique by birth. Our perspectives, experiences, geographical influences, and beliefs shape who we become. We don’t all need to agree on everything because we are individuals.

When we look inside, however, we’re all made in the exact same way! The same power that lights the sun, spins the earth, and sprouts the seeds is within each of us. Quantum science proves we are all made of this same energy. While we have no control over the way others treat us, we do have the ability to always choose how we react. I believe despite our shortcomings, our nation is still one of the greatest places on earth to live. I’m proud to embrace the diverse fabric of my fellow citizens. No matter what people are saying to attack the ideals you hold dear, we can choose to fly above our differences.

Take a lesson from the mighty eagle and stop wasting time with the crows in your life. Soar with love, compassion, and gratitude and the haters will fade away. Up high, the view is much clearer.